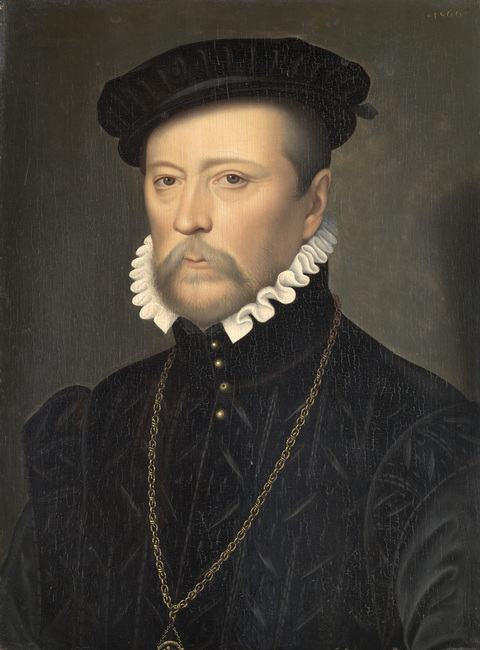 1
Link Copied
Little is known about François Clouet, son of one of the most influential portraitists of his time. His father, Jean Clouet (about 1485–1540/41), was probably a native of Brussels and is first documented as working as the royal painter in 1516 while living in Tours, where François is believed to have been born in about 1520 or even as early as 1515.1 A year after Jean’s death, François appeared with his mother before the court of accounts in Paris to obtain a copy of his father’s inventory.2 In 1547, he was charged with overseeing the funeral ceremony for King Francis I (1494–1547) and with the execution of his effigy.3 François worked for four consecutive French kings—Francis I, Henry II (1519–1559), Francis II (1544–1560), and Charles IX (1550–1574)—and is first called the “royal painter” on the occasion of the baptism of his godchild in 1540. Several payments made to the painter in 1542, 1544, 1546, and 1547 have been identified in the royal accounts and testify to his continuous activity in the service of the French kings after his father’s death.4 He died in Paris in 1572, where he had moved after selling his house in Tours in 1545. More importantly, he continued his father’s workshop and further developed the portrait tradition at the court of France, shaping the image of French portraiture of the sixteenth century.
2
Link Copied
The sitter of the Clowes portrait, François de Scépeaux (1510–1571), lord of Vieilleville, looks directly at the viewer. He wears an elegant black doublet with a high, buttoned-up, frilled collar and a black cap. A pendant, truncated by the lower edge of the painting, is suspended from a chain around his neck. Such pendants usually signify affiliation with a noble order, such as the royal Order of Saint Michael, founded by King Louis XI (1423–1483) in 1469, to which the sitter was appointed in 1554 after joining the Royal Council in 1551. A drawing of the sitter of nearly the exact size is preserved at the British Museum (fig. 1), and it indicates both his name and the date 1566, which is repeated in gold numerals in the upper-right corner of the Clowes painting. François de Scépeaux served as Marshal of France under King Charles IX, one of the highest military distinctions, and played a prominent part in the French wars of religion between Catholics and Huguenots. Toward the end of his life, the statesman also served as the French ambassador to Germany, England, and Switzerland.
placeholder
Figure 1: François Clouet (French, before 1522–1572), Portrait of François de Scépeaux, Sire de Vieilleville and maréchal de France, about 1559 and 1566, black and red chalk with touches of yellow wash in a later hand on paper, 12-33/64 × 8-21/32 in. © The Trustees of the British Museum. The British Museum, London, 1910,0212.80. 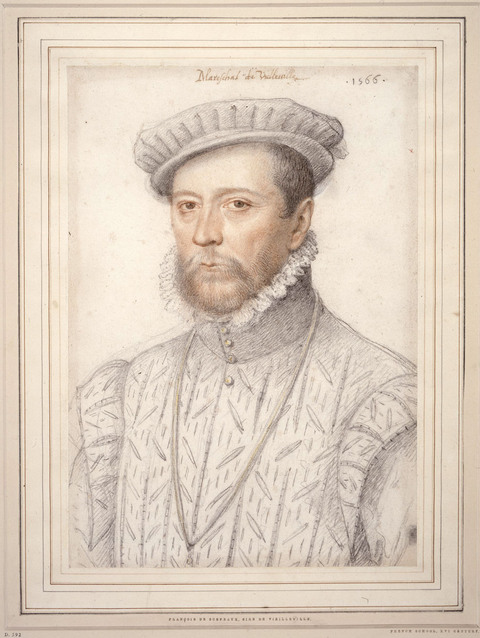 Figure 1: François Clouet (French, before 1522–1572), Portrait of François de Scépeaux, Sire de Vieilleville and maréchal de France, about 1559 and 1566, black and red chalk with touches of yellow wash in a later hand on paper, 12-33/64 × 8-21/32 in. © The Trustees of the British Museum. The British Museum, London, 1910,0212.80.
3
Link Copied
The attribution of the drawing in the British Museum to Jean Clouet’s son François was first suggested by the French painter, collector, and art historian Étienne Moreau-Nélaton.5 Louis Dimier, the eminent connoisseur of French portraits of the Renaissance, proposed an attribution to a painter he referred to as the “Master of Luxembourg-Martigues,” whose painting was more rich and saturated, with an emphasis on surface brilliance.6 He based the eponym on the drawing of Sébastien de Luxembourg, viscount of Martigues, in the portrait album of Catherine de' Medici (1519–1589) in Chantilly. Later, he proposed the identification of the anonymous draftsman active in François Clouet’s workshop as Jean Duval, a painter from Le Mans who worked in Paris and died in 1581.7 However, there is no strong evidence to support this identification of the “Master of Luxembourg-Martigues” with Jean Duval.8
4
Link Copied
The art historian Alexandra Zvereva attributes the drawing to François Clouet and workshop, noting that it was probably begun as early as 1559 and then altered in about 1566. The alterations are most visible along the contour of his right shoulder and the hat, whereas the facial features do not appear to have been changed significantly.9 Zvereva also pointed out that the painting in the Clowes Collection is based on the altered drawing, which is supported by the technical examination that did not reveal any significant pentimenti or changes in the composition of the figure or the dress. The finding conforms to dating the painting to 1566 according to the inscription in the upper-right corner.
5
Link Copied
Dimier’s characterization of the painting technique of the “Master of Luxembourg-Martigues” is echoed in the Clowes painting. It describes a broader trend in the later works of François Clouet and his workshop, which tends to concentrate on the stylization of facial contours, seen for example in the large almond-shaped eyes, and a fine blending of translucent layers of paint for the skin tones. Pastel-like blended surface effects and a few shimmering highlights on the bridge of the nose and forehead are typical of portraits from the 1540s and 1560s, as can be seen, for example, in those of Henry II in the Palazzo Pitti10 or the young Charles IX in Vienna (fig. 2).11 In contrast to the graphic quality of Jean Clouet’s few accepted autograph portraits, as, for example, the famous half-length portrait of King Francis I,12 the general trend of the second half of the sixteenth century tends toward a more homogenous and blended application of colors that highlights subtle light effects and creates a shimmering surface. Shadows are modeled with thin layers of gray wash and are softly blended to avoid rigid lines or hard transitions, an effect that is echoed in the grayish background that darkens toward the edges of the painting, creating the impression of a subtle light source.
placeholder
Figure 2: François Clouet (French, before 1522–1572), King Charles IX of France (1550–1574), about 1561, oil on oak wood panel, 9-27/32 x 8-17/64 in. Photo: Erich Lessing / Art Resource, NY. Kunsthistorisches Museum, Vienna, Gemäldegalerie, 5638. 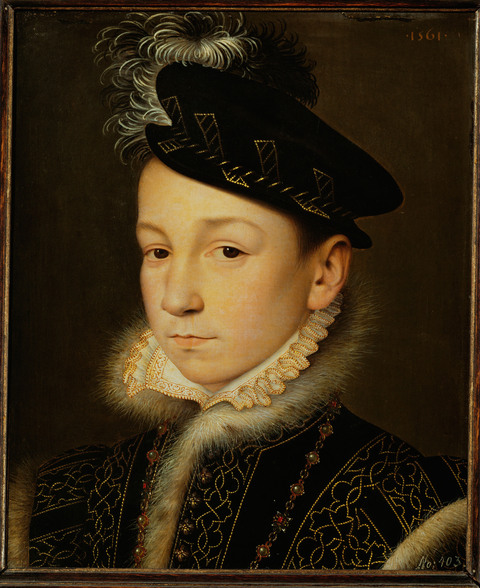 Figure 2: François Clouet (French, before 1522–1572), King Charles IX of France (1550–1574), about 1561, oil on oak wood panel, 9-27/32 x 8-17/64 in. Photo: Erich Lessing / Art Resource, NY. Kunsthistorisches Museum, Vienna, Gemäldegalerie, 5638.
6
Link Copied
The execution of the sitter’s face contrasts with the summary treatment of the hat and dress. The white collar is executed with rigidness and only a few layers of paint; the silk applications on his black doublet are painted in broad, quickly applied brushstrokes to indicate the pattern. This effective manner of painting clearly evokes the texture of the fabric, but upon closer examination presents a simplified approach to the depiction of the expensive cloth. It suggests that the portrait was painted with the help of assistants, and, as several copies of the portrait are known, conforms to a common practice in the reproduction of likenesses. One portrait in Versailles, thought to be contemporaneous to the Clowes painting, depicts the sitter with a different doublet (fig. 3);13 another version appears to be based more closely on the London drawing.14 As the latter is painted on canvas, it may also be possible that it is a copy either after the Clowes painting or a similar version. Dimier lists two other copies.15 Of all the surviving painted versions, the Clowes portrait is closest to the London drawing and compares best to works by François Clouet of the 1560s.
placeholder
Figure 3: Workshop of François Clouet (French, before 1522–1572), Portrait of François de Scépeaux Vieilleville, Maréchal de France in 1562, about 1566, oil on wood, 12-19/32 × 8-21/32 in. © RMN-Grand Palais / Art Resource, NY. Photo: Franck Raux. Châteaux de Versailles et de Trianon, Versailles, France, MV3220. 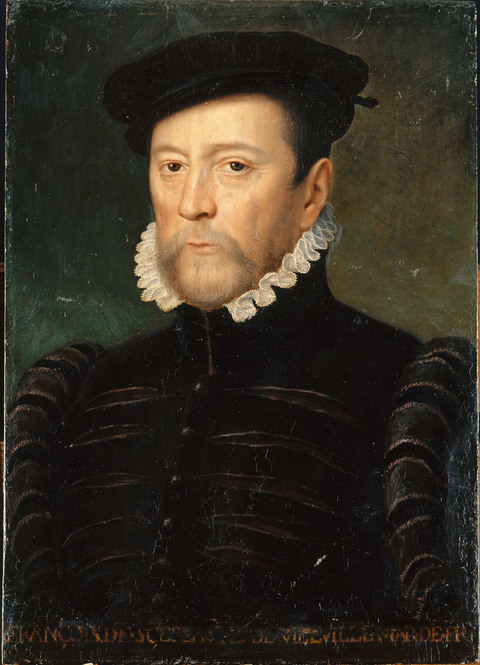 By descent within the family of the sitter to Jean de Scépeaux.

Indianapolis Museum of Art at Newfields, 2019, Life and Legacy: Portraits from the Clowes Collection;

The uncradled panel consists of a single, radially cut oak plank of Baltic origin. It retains its original thickness of 1.2 cm in the center and beveling along the four edges. Dendrochronological analysis has found that the earliest heartwood ring was formed in 1517, providing its earliest possible date of creation as 1534. The panel was most likely prepared with a chalk ground layer common for Northern European panel paintings and a thin white priming layer of lead white likely bound in an oil-based medium. The underdrawing has been executed in a dry medium, outlining the contours and fringes of the collar, and using parallel hatching to indicate shaded areas. The absence of adjustments may indicate that a transfer method may have been used, although no marks of mechanical transfer have been identified on the drawing in the British Museum. The support and paint layers are in good condition. The painting has undergone previous treatment to compensate for minor losses. Its cracked varnish coating consists of multiple layers that have developed a craquelure over time and obstructs the visibility of the painted surface.