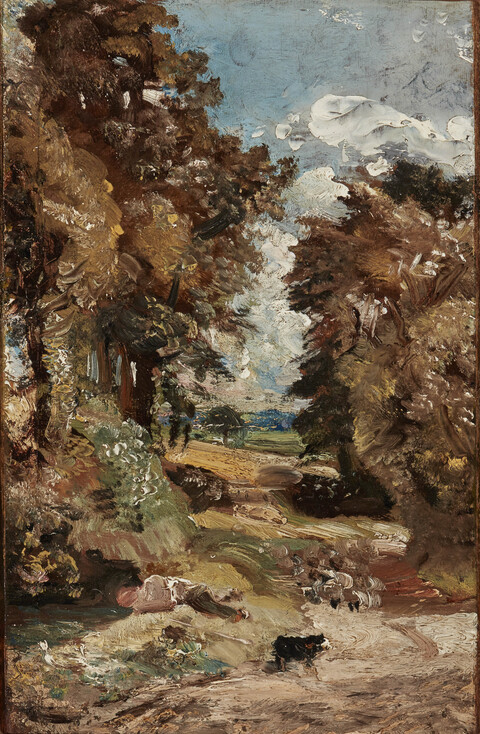 1
Link Copied
On the occasion of an exhibition devoted to John Constable’s paintings, drawings, watercolors, and mezzotints held at a New York gallery in 1988, critics commended the selection of works, with many specifically praising a newly attributed oil sketch lent by the Indianapolis Museum of Art, then on long-term loan from The Clowes Fund.1 Reviewing the show, the art critic for the New York Times wrote: “The Cornfield, from around 1815…may be a missing sketch for an important 1826 panting of the same title…. It is a gutsy painting, turbulent and resolute, complete in itself, one of many in a show that makes Constable’s achievement seem coherent and complete."2 An equally admiring critic for the New York Observer declared: “Every painterly touch of the brush in this picture looks as fresh and delicious as the day it was painted."3 These are fitting accolades for an artist whose attention to details of weather and atmospheric conditions was so keen that his fellow Royal Academician Henry Fuseli (1741–1825) once claimed Constable’s landscapes “make me call for my great coat and umbrella."4
2
Link Copied
With its fresh and spontaneous brushwork; idyllic, agrarian subject; and apparent plein-air facture, The Cornfield typifies the qualities that led the noted early twentieth-century German art critic Julius Meier-Graefe to call Constable “the father of modern painting, if it is to have a father at all."5 In the foreground, a young shepherd stretches out on a grassy knoll, quenching his thirst at a stream. His sheepdog stands at attention beside him, while his flock—represented by splotches of white and black—stands in a cluster nearby. A gate leads to the wheat field, known as Fenbridge Field, in the background, and beyond it (unseen in the sketch) lies the river Stour. The paint is applied in thick swirls and dragged brushstrokes, and the clouds appear to have been applied with a palette knife, spread across the surface of the sky like frosting. Much like the landscape for which it was a sketch (fig. 1), this charming oil study is a celebration of rural life and a nostalgic recollection of preindustrial agrarian society.
placeholder
Figure 1: John Constable (English, 1776–1837), The Cornfield, 1826, oil on canvas, 56-19/64 x 48-1/32 in. The National Gallery, London, Presented by subscribers, including Wordsworth, Faraday and Sir William Beechey, 1837, NG130. 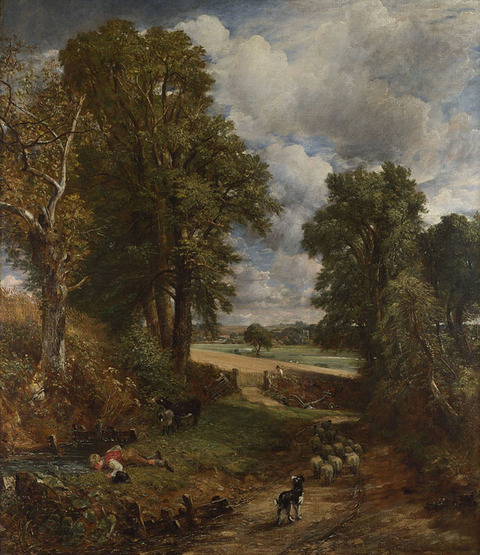 Figure 1: John Constable (English, 1776–1837), The Cornfield, 1826, oil on canvas, 56-19/64 x 48-1/32 in. The National Gallery, London, Presented by subscribers, including Wordsworth, Faraday and Sir William Beechey, 1837, NG130.
3
Link Copied
Having been first rejected by the leading Constable expert Graham Reynolds in 1966 on the basis of photographs,6 as well as by Robert Hoozee in his 1979 catalogue raisonné of the artist’s work,7 this bravura oil sketch was reconsidered by Charles Rhyne, a professor at Reed College and an authority on the artist. Rhyne believed the work to be an authentic Constable sketch from nature, presumed to be missing.8 According to him, The Cornfield was the first plein air study for Constable’s celebrated painting of the same name, shown at the 1826 Royal Academy exhibition in London.9 As such, Rhyne dates it to about 1814–1816, based, in part, on stylistic similarities to Flatford Mill (“Scene on a Navigable River”) (fig. 2). Rhyne compares the Clowes sketch to a second larger, mid-stage preparatory sketch in the Bacon collection.10 Although multiple copies exist of the National Gallery picture, which was readily available for Academy students to copy, Rhyne points to a number of features in both the Clowes and Bacon sketches that are not present in the finished painting or in the print made after it. For example, in both studies, the tree at far left is full and leafy, while in the National Gallery picture it appears as a pollard oak. Also, a distinct highlight on the path in the right foreground is absent in the final version. Such details, explains Rhyne, prove that the Clowes sketch is preparatory rather than a copy. It is somewhat unusual that the Bacon sketch lacks the shepherd, sheepdog, and flock of the Clowes sketch, but Rhyne insists that this does not undermine the attribution to Constable.
placeholder
Figure 2: John Constable (English, 1776–1837), Flatford Mill (“Scene on a Navigable River”), 1816–1817, oil on canvas, 40 x 50 in. Tate Gallery, London, Bequeathed by Miss Isabel Constable as the gift of Maria Louisa, Isabel and Lionel Bicknell Constable, 1888, N01273.

Figure 2: John Constable (English, 1776–1837), Flatford Mill (“Scene on a Navigable River”), 1816–1817, oil on canvas, 40 x 50 in. Tate Gallery, London, Bequeathed by Miss Isabel Constable as the gift of Maria Louisa, Isabel and Lionel Bicknell Constable, 1888, N01273.
4
Link Copied
In 1991, The Cornfield was lent to the Tate Gallery for the museum’s Constable exhibition, and its place in the artist’s oeuvre was discussed by the curators Leslie Parris and Ian Fleming-Williams.11 Like Rhyne, they accept the sketch as autograph: “Although some of the handling is unusual—the swirl of knife work in the sky and some of the wriggled impasto—there seems to be a reasonable case for accepting this as a preliminary sketch by Constable for the painting he exhibited in 1826, no. 165.” Parris and Fleming-Williams note that the treatment of the tacking edges, which have been turned up to create a larger surface on which to paint, is typical of the artist. However, they identify the Clowes sketch as a studio work of about 1826 and consider the Bacon sketch to be the first study, made from nature in about 1817. More recently, Reynolds, in his catalogue of The Early Paintings and Drawings of John Constable, revised his original opinion to support Rhyne’s identification of the Clowes sketch as the first plein air study for The Cornfield.12 Like Rhyne, he dates it to about 1816.
5
Link Copied
The view depicted in The Cornfield held great personal meaning for Constable, who once claimed “I associate my ‘careless boyhood’ with all that lies on the banks of the Stour. Those scenes made me a painter and I am grateful."13 The path is probably Fen Lane, which Constable took from home to school as a child. Charles Golding Constable (1821–1879), the artist’s son, wrote of the picture in 1879: “[The Cornfield] was taken in the lane leading from East Bergholt (my father’s native village) to the pathway to Dedham across the meadows, a quarter of a mile from East Bergholt Church, and one mile from Dedham Church, as the crow flies. The little church in the distance never existed; it is one of the rare instances where my father availed himself of the painter’s license to improve the composition."14 However, another Constable scholar, Attfield Brooks, has proposed that the church might be Higham (upstream from Stratford St. Mary), although its design does not include a stair turret.15 In the Clowes sketch, the church appears only as a dot of lavender gray on the horizon.
6
Link Copied
The season is clearly summer, perhaps July or August, and about midday based on the position of the sun and shadows. The relationship between the masses of foliage along the right and left margins has been adjusted between the two sketches and the final composition to achieve a more Claudian sense of balance. The shepherd boy may also recall seventeenth-century precedents: perhaps the figure of Narcissus in Claude Lorrain’s Landscape with Narcissus and Echo (fig. 3), which had been in the collection of Sir George Beaumont (1753–1827), one of Constable’s patrons, according to Michael Rosenthal,16 or the young shepherd in Gaspard Poussin’s Landscape Near Albano (about 1670; London, National Gallery), which Constable saw on exhibition in 1822. Some elements, such as the pigeon flying into the pollard oak in search of its mate, derive from Constable’s earlier paintings, while others—the attentive dog looking up in the foreground, for example—are entirely new.
placeholder
Figure 3: Claude Lorrain (French, 1600 or 1604/1605–1682), Landscape with Narcissus and Echo, 1644, oil on canvas, 37-1/4 x 46-47/64 in. The National Gallery, London, Presented by Sir George Beaumont, 1826, NG19. 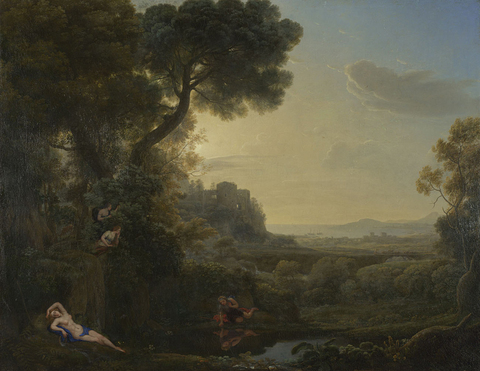 8
Link Copied
I have dispatched a large landscape to the Academy—upright the size of my lock—but a subject of a very different nature—inland—cornfields—a close lane—kind of thing—but it is not neglected in any part the trees are more than usually studied and the extremities well defined—as well as their species [?stems]—they are shaken by a pleasant and healthful breeze—"at Noon”—“while now a fresher gale, sweeping with shadowy gust the feilds [sic] of corn” &c &c…. I am much worn, having worked very hard—& have now the consolation of knowing I must work a great deal harder. Or go to the workhouse. I have however work to do—& I do hope to sell this present picture—as it has certainly got a little more eye-salve than I usually condesend [sic] to give to them.17

9
Link Copied
Constable was evidently pleased with the work, and contemporary critics concurred: a review by Robert Hunt appeared in the Examiner on 2 July 1826, which praised the painting’s “saphire [sic] sky and silver clouds, its emerald trees and golden grain, its glittering reflexes of sun-light among the vegetation; in fine, its clear, healthful, and true complexion, neither pale, nor flushed, nor artificial."18 However, The Cornfield did not find a buyer at that or any other exhibition. It remained in Constable’s studio at his death in 1837, when it was purchased for the National Gallery by a group of subscribers, led by Sir William Beechey (1753–1839), for £315 (£35,533 in 2019 pounds).19 When it was accepted on 9 December­—given as a memorial to the artist—it became the first work by Constable to enter the museum’s collection. The Cornfield is considered the most iconic Constable in the museum after The Haywain (1821; London, National Gallery).
10
Link Copied
Recent art historical consensus about the significance of the artist’s oil sketches places The Cornfield squarely among Constable’s autograph works. What the Clowes sketch may lack in sweeping vistas, as compared to the full-scale painting, it compensates for in charm and spontaneity. “Painting is but another word for feeling,” said Constable, in one often-quoted letter to his friend John Fisher. “It is the business of a painter to make something out of nothing, in attempting which he must almost of necessity become poetical."20

Sold in the artist's estate sale at (Foster and Sons, London) in 1838;

By descent to G.L Eames, Boston.23

NB: This documentation of the provenance cannot be reconciled with an alphanumeric code of stenciled letters on the right stretcher member: 305GG; see Technical Examination Report. This code can be linked to a consignment of 62 paintings brought to Christie’s, London, in April 1936 by “Mrs. H. Shirlaw” of Putney. Christie’s “Daybooks” record that items from the Shirlaw consignment went to auction on 27 May 1936, although this painting presumably went back to the owner before the sale; for correspondence with Christie’s Archives in August 2018, see IMA Provenance File C10024.

A. Ian Fraser, A Catalogue of the Clowes Collection (Indianapolis: Indianapolis Museum of Art, 1973), 98;

The canvas is supported by an old lining. Tacking holes are visible on the lower left and right sides of the painting, and a crease suggests that the original tacking margins were overpainted and incorporated into the composition. There are no observable pentimenti under IRR. The oil paint was applied using a wet-in-wet technique with pigments blended directly on the canvas in places. A medium-sized, hard-bristled brush was used in addition to a hard-edged tool, such as a palette knife. Although some areas of the composition are painted more thinly, in areas where impasto is present, it is well preserved.