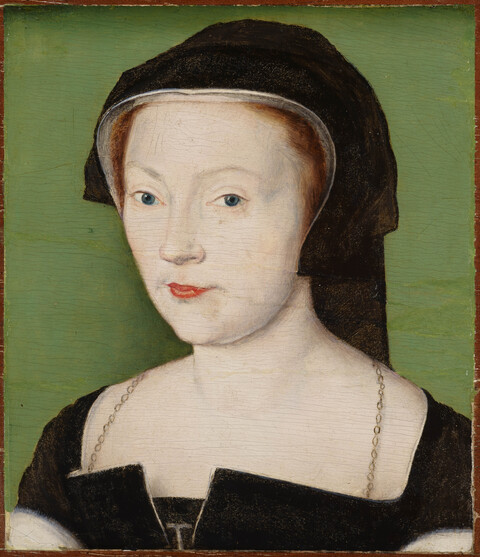 1
Link Copied
A young woman peers out at the viewer. The formality of her pose belies the touch of a smile that extends to a lively pair of blue eyes. Her black silk headdress frames delicate features and veils a crop of rich, auburn hair. By contrast, a creamy area of décolletage is revealed by the gown’s square neckline, where a single chain is elegantly draped, and just visible on her arms is a pair of white fur oversleeves. These materials and textures are a foil to the austere black costume that serves to enhance the sitter’s porcelain-like complexion against the light green background. To the modern eye, her attire might seem unassuming, but, in actuality, it conforms to an aristocratic French style dating from the early sixteenth century. A similar fashion was adopted by Louise de Savoy (1476–1531), the mother of King Francis I (1494–1547), as a sign of widowhood after her husband died in 1496. In fact, the black headdress worn here by de Guise suggests that she, too, was a widow when this portrait was executed.
2
Link Copied
The modern identification of the sitter is not undisputed. In 1947, when it was purchased by George H.A. Clowes, it was identified as Diane de Poitiers (1499–1566), the famous mistress of the king of France, Henry II (1519–1559), and the rival of Queen Catherine de' Medici (1519–1589).1 However, in 1968, the art historian Mark Roskill, with the assistance of Dana Bentley-Cranch, noted similarities between the Clowes portrait and two others believed to depict Marie de Guise (1515–1560) in Edinburgh and Versailles (fig. 1 and fig. 2).2 Following this discovery, Ian Fraser, the first curator of the Clowes Collection, formally identified the sitter as Marie de Guise.3 Corneille de Lyon did not inscribe his paintings, nor are any portrait drawings by him preserved that could firmly establish the identity of the sitter. When the painting was in the collection of the art dealer Jacques Seligmann and exhibited in Paris in 1937, its identification was based on drawings of Diane de Poitiers from the album of Clouet drawings that once belonged to Catherine de' Medici in Chantilly, France.4 The one closest to the Clowes composition however is dated to about 1540 and not part of Catherine’s album, thus likely to be a later copy made in the surrounding of the workshop. It shows an older woman (Diane de Poitiers would have been about 40 at the time) in comparable pose and expression as the woman in the Clowes painting (fig. 3).5 The identification with Marie de Guise is also based on a comparison with portrait drawing from the circle of Jean Clouet (about 1485–1541), the leading portraitist at the French court who was a skilled master in the use of red and black chalks.6 In favor of Marie de Guise are the provenance of the Edinburgh painting in the collection of Robert de Gaignières and a comparison with a drawing in the British Museum that bears the inscription: “La mere de la Royne descose/de la mesant de guise” (The mother of the Queen of Scotland of the House of Guise) (fig. 4).7 Although this drawing most likely dates to the early 1550s, when Marie de Guise briefly visited France as the regent of Scotland, and depicts a woman in comparable pose and dress to that of the sitter in the Clowes portrait, the lines around her mouth and an air of austerity give the appearance of a slightly older woman. Also, her eyes are larger and of a hazel color rather than blue. If one accepts the likeness as the key to identifying the sitter, her youthful appearance and somber dress in the Clowes painting, paired with the attribution to the artist Corneille de Lyon, who worked in France, imply that this portrait dates from 1537 to 1538—the brief period after the death of de Guise’s first husband, de Longueville, and before her departure for Scotland after marrying James V.
placeholder
Figure 1: Corneille de Lyon (Netherlandish, 1500/1510–1575), Mary of Guise, 1515–1560. Queen of James V, about 1537, oil on panel, 8-21/32 × 5-15/16 in. (panel), 17-9/16 × 16-9/64 × 2-61/64 in. (framed). Scottish National Portrait Gallery, National Galleries of Scotland, Presented by E.P. Jones 1950, PG 1558. 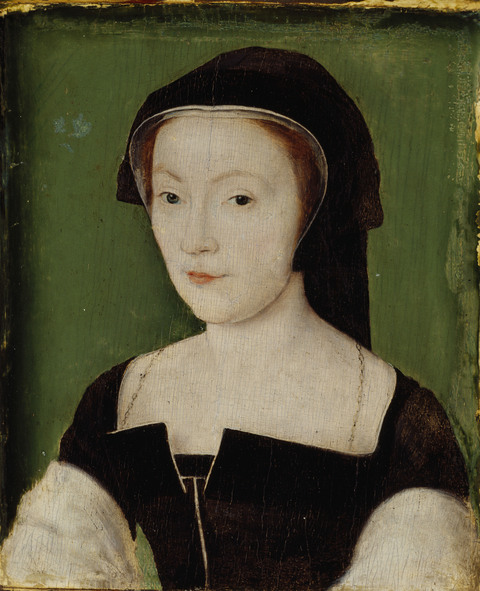 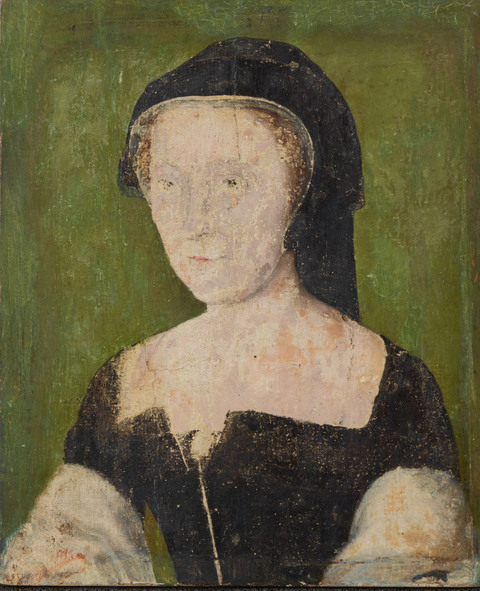 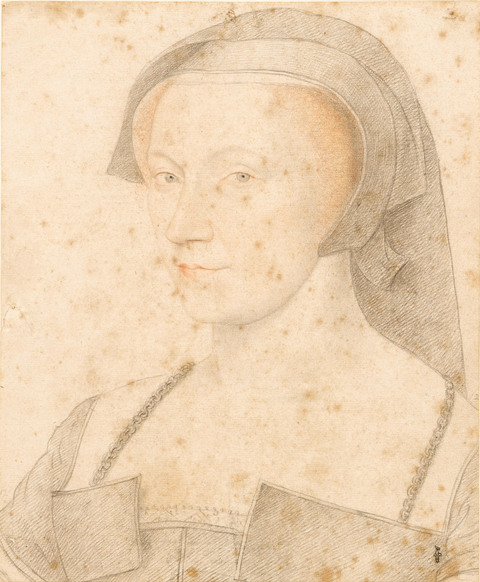 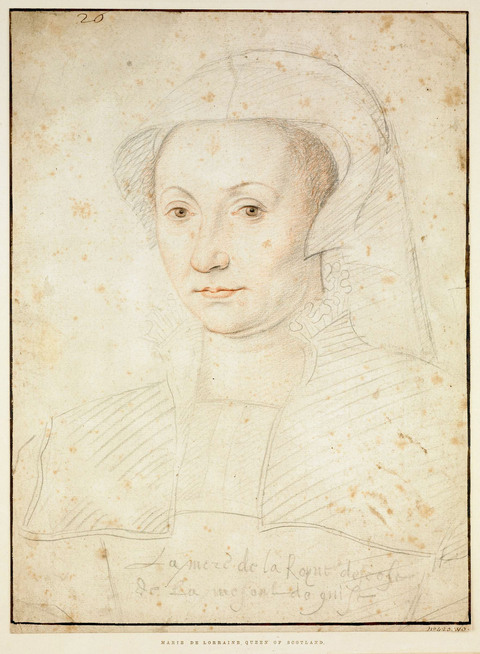 Figure 4: Circle/School of François Clouet (French, before 1522–1572), Portrait of Marie de Lorraine, Queen of Scotland, about 1522–1572, black chalk with red chalk on paper, 11-57/64 × 8-13/16 in. The British Museum, London, Gg, 1.420. © The Trustees of the British Museum.
3
Link Copied
Marie de Guise, also known as Marie de Lorraine, was one of the most powerful women of her time. Born in 1515 in Bar-le-Duc within the Lorraine region of northeastern France, she was the daughter of aristocrats Antoinette de Bourbon (1493–1583) and Claude de Lorraine (1496–1550). He was a high-ranking soldier and later made a duke and Peer of France by King Francis I. Having distinguished himself in service, Claude was awarded the title of Duke de Guise in 1528. For his eldest daughter, Marie, he arranged an advantageous marriage with Louis II d’Orléans, Duke de Longueville (1510–1537). The couple married in 1534, but the union ended unexpectedly with his death just two years later, leaving Marie a widow at the age of twenty-one. Soon thereafter, she became a pivotal figure in French foreign politics.
4
Link Copied
In 1537, after the death of Henry VIII’s (1491–1547) third wife, Jane Seymour (1509–1537), the king of England attempted to court Marie.8 (In fact, evidence claims that Hans Holbein the Younger [1497/1498–1543], who held the official title of “King’s Painter,” may have been commissioned to capture her likeness, perhaps in relation to marriage negotiations.)9 However, that same year the wife of James V (1512–1542), King of Scots, died. Madeleine (1520–1537) was the daughter of Francis I (1494–1547), and her premature death threatened the strategic alliance between the Catholic states of France and Scotland.10 As a result, Henry VIII’s courtship was thwarted when Marie was, instead, directed by Francis I to marry his widowed son-in-law (fig. 5). The couple produced three children before James’s death a few years later. As his widow and the queen regent, Marie played a central role in the rivalry between France and England. She actively supported the claim to Scottish rule on the British Isles, and through her daughter, Mary Stuart (1542–1587), she continued to nurture close ties between the Catholic nations with the marriage of her daughter to the French dauphin, Francis II (1544–1560). A forceful presence to the end, Marie de Guise died after a brief illness while at Edinburgh Castle in 1560.
placeholder
Figure 5: Unknown artist, James V of Scotland and Mary of Guise, about 1538, oil on wood panel. Collection of His Grace the Duke of Atholl, Blair Castle, Perthshire, Scotland.

Figure 5: Unknown artist, James V of Scotland and Mary of Guise, about 1538, oil on wood panel. Collection of His Grace the Duke of Atholl, Blair Castle, Perthshire, Scotland.
5
Link Copied
In addition to the three versions already mentioned—Edinburgh, Versailles, and Indianapolis—a fourth portrait was last documented at auction in 1954, and a fifth is in the collection of the Duke of Buccleuch.11 The art historian Anna Dubois de Groër considered the Edinburgh version to be the original from which the other paintings were copied, both for stylistic considerations and the fact that it bears the wax seal of Colbert de Torcy on its reverse, proving that this painting indeed was part of the Gaignières collection.12 By comparison, the Clowes version is slightly smaller than both the Edinburgh and Versailles paintings, which may be the result of having been trimmed during a later intervention.13 This helps explain why the sitter’s left shoulder is not fully depicted in the Clowes painting as it is in the Edinburgh panel, where the positioning of the arms suggests that her hands are folded in front of the body, showing her almost as a half-length figure, and corresponds to the length Corneille usually depicted in his portraits. Given the multiple versions of this portrait, it is likely that they were used as presents to be displayed in portrait galleries and probably also copied for a growing collector’s market in following centuries.
6
Link Copied
That the Clowes painting shares a direct relation with the Edinburgh version is supported by a comparative 1:1 overlay of the two, which demonstrates that the outer contour of the averted side of the face (proper left), shoulder line, and position of the train of the headdress, as well as the position of the eyes, noses, and lips, match exactly, leaving no doubt that both portraits were based on a common source, either a drawing or a painting (fig. 6). As there are no known surviving drawings attributed to Corneille de Lyon, it is not clear whether this model was a portrait drawing or another type of intermediary support used to copy additional versions from an extant painting.14
placeholder
Figure 6: Overlay of Corneille de Lyon’s Mary of Guise, 1515–1560, Queen of James V, Scottish National Portrait Gallery, National Galleries of Scotland, Presented by E.P. Jones 1950, PG 1558, onto Workshop of Corneille de Lyon’s Portrait of Marie de Guise, Indianapolis Museum of Art at Newfields, The Clowes Collection, 2017.88. 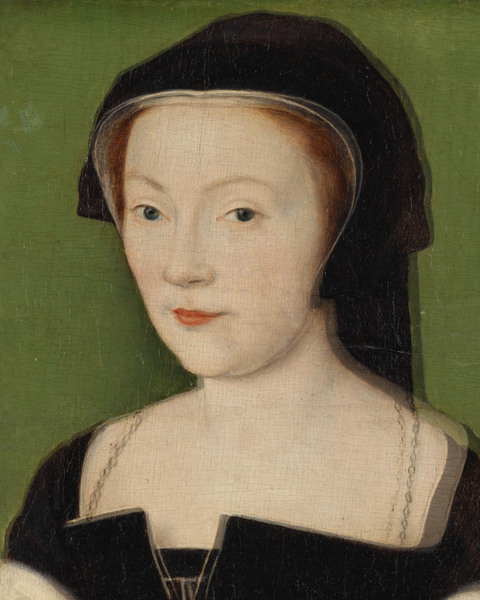 Figure 6: Overlay of Corneille de Lyon’s Mary of Guise, 1515–1560, Queen of James V, Scottish National Portrait Gallery, National Galleries of Scotland, Presented by E.P. Jones 1950, PG 1558, onto Workshop of Corneille de Lyon’s Portrait of Marie de Guise, Indianapolis Museum of Art at Newfields, The Clowes Collection, 2017.88.
7
Link Copied
This small-scale panel, the typical portrait size in sixteenth-century France, employs thinly applied layers of paint to a shimmering, transparent effect that is emphasized by the pale green background. These particularly striking visual features are associated with a larger group of sixteenth-century French portraits attributed to the artist. However, in comparison to the Edinburgh panel, the Clowes work is less expressive in its handling, with controlled brushwork. Corneille de Lyon operated a workshop that included his sons and son-in-law Jean Maignan,15 and probably other assistants. This would account for the numerous portraits associated with his style, and it is conceivable that the Clowes painting is a copy made after a model in Corneille’s workshop.

(Pierre F. Nesi, Beverly Hills, California, and later New York), on commission with him in 1941;21

John Herron Art Museum, Indianapolis, 1950, Holbein and His Contemporaries, no. 48;

A Lenten Exhibition Loaned by the Clowes Fund, Inc., of Indianapolis (Notre Dame, IN: The Art Gallery, University of Notre Dame, 1962), no. 34;

The support is constructed from a single wooden panel with the grain horizontally aligned. Attached to the back of this is a second wooden panel, to which a cradle is affixed. This comprises five fixed horizontal and three sliding vertical members. Measurements with the cradle are 5-5/16 × 4-9/16 × 9/16 in. (13.5 × 11.6 × 1.5 cm). These dimensions include edge strips that were attached to all four sides. It is not known when these were added, but the wood is of a similar grain to the panel. The presence of these strips suggests the possibility that the panel was trimmed.

The ground appears to be a single layer of thin chalk and glue ground, and infrared reflectography shows evidence of underdrawing. According to X-radiography, past damage was sustained from major splitting in two areas along the wood grain, as well as insect damage that has caused some losses. These were treated with a lead-based fill material, and overpaint covers some areas of paint loss. The dating of previous treatment is not known; however, the presence of zinc indicates a date after 1834.