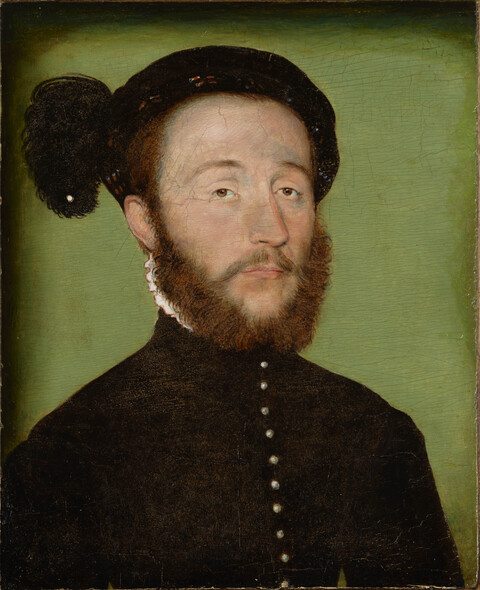 1
Link Copied
This bearded and somewhat melancholy man wears a black doublet with a row of small white buttons over a white shirt with a ruffled collar. His black, narrow-brimmed hat is adorned with golden aglets and a large black feather. The painter used gold pigment to create the appearance of the shimmering buttons along the sitter’s chest, but the aglets on his hat are of a brownish color that render them barely distinguishable from the dark beret. The young courtier carries no other marks that might identify him, but the high collar of his doublet, which creates an elegant, elongated silhouette, and the feathered hat reflect male fashion at the courts of the French kings Henry II (1519–1559) and Charles IX (1550–1574), in the mid- and early second half of the sixteenth century.1
2
Link Copied
When the painting was first exhibited in 1904, at the first major show dedicated to the visual arts in France during the fifteenth and sixteenth centuries, it was already accepted as a work of the school of Corneille de Lyon, also known as Corneille de la Haye, one of the most important portrait painters active in France in the sixteenth century. The sitter has been identified as René du Puy du Fou (died 1566),2 a French nobleman and member of one of the most influential families from the Poitou (southwestern France), who married Catherine de La Rochefoucauld (1528–1577), the widow of Charles de Chabannes (died 1552), in 1559. René became a knight of the Order of Saint Michael and a valet de chambre (personal servant) to King Charles IX in 1552.3 The lack of the collar of the Order of Saint Michel could indicate that the portrait predates his admission to the order. This identification has been accepted since at least 1904, when the painting was in the Walter Gay Collection in Paris. This early identification was based on the sitter’s resemblance to a portrait drawing from the circle of François Clouet (before 1522–1572), now in the Musée Condé in Chantilly (fig. 1). That drawing, executed in black and red chalk, dates to about 1555 and also does not feature the collar of the Order of Saint Michael.4 Like many of the independent drawings preserved in the album of Chantilly, which were once in the possession of the French queen mother Catherine of Medici (1519–1589), the sheet has received a later inscription identifying the sitter as a Puy du Fou. Charles Sterling followed this comparison in 1937 but noted that the sitter in the portrait had also been identified as Rabelais (1494–1553), without referencing the source of this speculation.5 There was no doubt about the sitter’s traditional identification in 1947, when Dr. Clowes acquired the painting from the Seligmann Galleries in New York. However, the drawing in Chantilly is not as close to the Clowes portrait, as has been pointed out in more recent studies.6 The individual features differ, especially the eyebrows and expression of the eyes, and the dress (a slit doublet) and jewelry in the drawing do not correspond to their counterparts in the painting. If the painter had used a portrait drawing from the circle of the Clouet, he would have certainly also copied the dress—a common practice, as seen in the Clowes Portrait of Marie de Guise.
placeholder
Figure 1: François Clouet (French, before 1522–1572), René, seigneur du Puy-du-Fou (about 1528–1570), about 1555, black and red chalk, leadpoint, stumping on paper, 13-3/16 × 9-1/4 in. Musée Condé, Chantilly, France, MN323; B133 © RMN-Grand Palais / Art Resource, NY. Photo: René-Gabriel Ojéda. 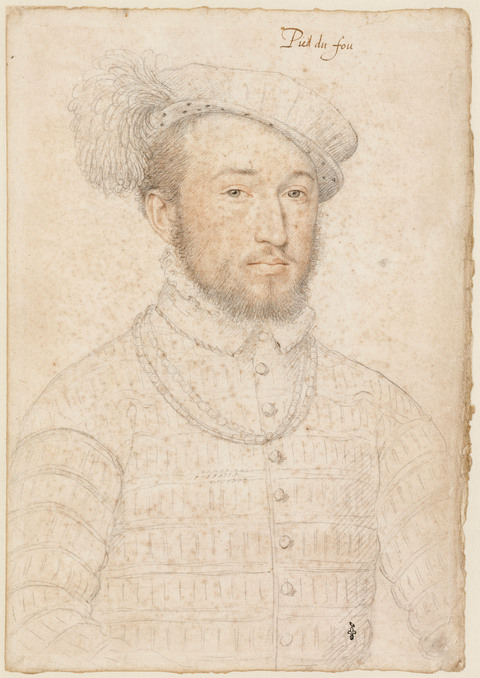 Figure 1: François Clouet (French, before 1522–1572), René, seigneur du Puy-du-Fou (about 1528–1570), about 1555, black and red chalk, leadpoint, stumping on paper, 13-3/16 × 9-1/4 in. Musée Condé, Chantilly, France, MN323; B133 © RMN-Grand Palais / Art Resource, NY. Photo: René-Gabriel Ojéda.
3
Link Copied
This skepticism toward the identification based on the Chantilly drawing has been shared by Louis Dimier,7 one of the early experts on French Renaissance portraiture, and also Mark Roskill, who in a draft entry on the painting in 1968 called it a “Portrait of a Man in a court bonnet."8 According to Roskill, Dimier believed that the Chantilly drawing depicts François III (1521–1572), count of La Rochefoucauld, based on an inscription on two painted portraits of the nobleman.9 But the portrait of this sitter also differs from the Clowes painting, and no copies or variants are known that might suggest a new identification.
4
Link Copied
A portrait more closely related in terms of individual features is the portrait of Charles de la Rochefoucauld (about 1523–1562), count of Randan (fig. 2), and brother of the aforementioned Catherine de la Rochefoucauld.10 Although the depiction of the area around the eyes, with the high, slightly downward-curving brows, and the straight nasal bridge are much closer in that portrait than in the Chantilly drawing or the painting in Versailles, the resemblance could be generic; thus, whether or not the sitter in the Clowes painting is another member of the La Rochefoucauld family remains speculative.
placeholder
Figure 2: Corneille de Lyon (about 1500/10–1575), Charles de la Rochefoucauld, Comte of Randan (1523–1562), about 1548, oil on wood, 5-29/32 × 5-1/8 in. Musée du Louvre, Paris, France, RF1961-10 © RMN-Grand Palais / Art Resource, NY. Photo: Stéphane Maréchalle.

Figure 2: Corneille de Lyon (about 1500/10–1575), Charles de la Rochefoucauld, Comte of Randan (1523–1562), about 1548, oil on wood, 5-29/32 × 5-1/8 in. Musée du Louvre, Paris, France, RF1961-10 © RMN-Grand Palais / Art Resource, NY. Photo: Stéphane Maréchalle.
5
Link Copied
The identification of the sitter is also tied to the question of attribution. Model drawings or patterns may have existed and been passed between workshops, although these would have been subject to a certain degree of idealization as the executing artists would have translated them into portraits in their own styles. This practice complicates comparisons and attempts at identification, especially when the identification of the sitter is based on a drawing executed by a different artist, in this case the Clouet workshop. Whether the difference in characterization of facial features is the result of the fact that it was being executed by a different artist or whether these slight divergencies, despite the great overall similarity, prohibit the identification of the sitter with René du Puy du Fou altogether remains difficult to answer since no painted version from the Clouet workshop is known.
6
Link Copied
The light green background still bears traces of a painted shadow cast onto the left edge and lower-right corner of the painting. The artist applied thin layers of paint with short brushstrokes intended to remain visible, creating the appearance of a sketchy surface. The artist applied black paint along the contour lines—for example, around the ear and the eye—suggesting a spontaneously modeled surface that is comparable to the visual effect of chalk drawings that, although blending the material, leave drawing marks visible. For the hair and the unusually bouffant beard, the artist used individual, short, curled brushstrokes and very few nuances of brown to create a semi-opaque surface evoking the effect of pastels.
7
Link Copied
The immediacy of these small-scale portraits is a trademark of Corneille de Lyon and his workshop and distinguishes them from the many highly finished oil paintings produced at the French court in the circle of Jean (about 1485–1541) and François Clouet. Originally from The Hague in the Netherlands, Corneille de Lyon settled in Lyons in eastern France in the early 1530s and quickly started to paint members of the royal family and the French court. In 1541, he became the official court painter to the future Henry II, son of the magnificent and art-loving king Francis I (1494–1547).11 Corneille had already established himself in Lyons as a sought-after portraitist of the French nobility, with a workshop open to the public, and continued to serve as royal painter and valet with special privileges to the son of Henry II, Francis IX (1550–1574), apparently until his death in 1575.12 As no portrait drawings by Corneille de Lyon are known, it remains unclear how he was able to access portraits most likely drawn at the court in the Loire Valley by the Clouets. This is a question of particular importance, since the sitters in several portraits attributed to Corneille are tentatively identified based on formal analogies with drawings from the Clouet workshop. As these drawings were already in albums, it seems likely that painted portraits served as his models. The nephew of the Venetian ambassador to France, Giovanni Capello (in office 1547–1551), mentions upon a visit to Corneille’s workshop that a veritable gallery of portraits was on display, leading Anne Dubois de Groër to suggest that Corneille might have kept a painted version in his workshop to serve as a model for subsequent commissions.13
8
Link Copied
The large number of small-scale portraits associated with his style but not painted by his hand complicates the attribution of those works. After the portrait of Pierre Aymeric, dated 1534, surfaced in 1962 (subsequently acquired by the Louvre), a new category was established for the identification and attribution of portraits that had been associated with Corneille since the seventeenth century. They were widely sought after following the interest of such art collectors as François Roger de Gaignières (1642–1715), who was eager to acquire paintings by this master.14 Portraits from his collection carry old inscriptions and identifications, and formed the basis for a chronology of the artist’s work.15 But it is also known that Gaignières ordered copies of paintings from his collection that he believed to be originals, but no comprehensive study of these works has been done.16 In the case of the Indianapolis portrait, which has lost its original support in the course of its transfer from wood to canvas, no marks of ownership or inscriptions remain that might illuminate the painting’s earlier history.17
9
Link Copied
The condition of the paint surface has suffered, as the painting has been transferred from wood to a canvas support and was lined. This rather invasive technique caused damage to the surface. As the portrait was originally painted on a wooden support with the grain running horizontally, an old crack pattern has developed along the grain. The transfer caused additional cracks running vertically across the upper part, and larger areas across the sitter’s forehead and along the upper and right edges of the painting have been retouched. During the process of a transfer, the entire original support was removed and the remaining ground and paint layers attached to a new support. This technique was developed in the mid-eighteenth century to preserve paintings on heavily damaged supports and was frequently used until the early twentieth century. It is unclear when the painting was transferred from wood to canvas, as the painting has until now been described as being painted on wood. When the painting was exhibited in 1904, and again in 1937, both catalogues mention it as being on wood. The marks on the back, however, suggest that the painting had already been transferred by the early twentieth century.18

The Cleveland Museum, Cleveland, 1931, Exhibition. Art through the Ages;

A. Ian Fraser, A Catalogue of the Clowes Collection (Indianapolis: Indianapolis Museum of Art, 1973), 150;