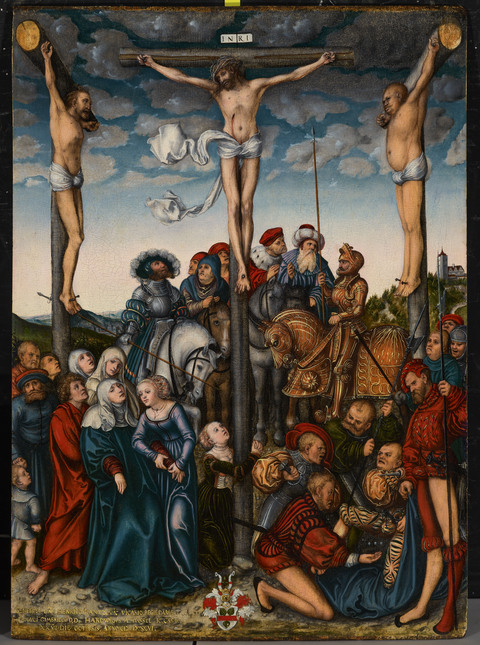 At top of cross: INRI

Bottom center: coat of arms of the Dassel family

[Given to the Honorable Henry Rantzau, Vicary of the King of Denmark, Nobleman of Holstein, by Doctor Hardwig of Dassel, in the Emperor’s Service, on the 26th day of October, 1596]

1
Link Copied
Recounted in all four Gospels, the Crucifixion is one of the pivotal events in the Christian religion. With his death on the cross, Jesus Christ atones for the sins of humankind, a necessary prelude to the Resurrection and the promise of salvation.
2
Link Copied
Here, Christ’s death takes place against a darkening sky and he is flanked by two crucified men, traditionally identified as the Good Thief and the Bad Thief. His body is presented frontally and symmetrically, and the ends of his loincloth flutter in the wind. In accordance with biblical accounts, the letters INRI written at the top of the cross stand for Iesus Nazarenus Rex Iudaeorum (Jesus of Nazareth, King of the Jews).
3
Link Copied
The lower half of the painting is filled with a multitude of figures, who can be divided into two groups that reflect the associations with left and right found in the late Middle Ages and Renaissance: right is good, left is bad. Christ turns to the Good Thief, on his right, as if to promise that he will join Christ in paradise (Luke 23:43). The soldier in armor astride a white charger is quite possibly the Centurion (Mark 15:39), who was among the first Gentiles to recognize Jesus as savior. Another proposal is that the soldier is Longinus.1 Also on Christ’s right is the swooning Virgin, in dark blue, who is supported by John the Evangelist and comforted by several holy women. The elegantly clad woman kneeling in prayer at the foot of the cross is Mary Magdalene, who has renounced her sinful life.
4
Link Copied
Conversely, the Bad Thief and Christ’s tormentors are on his left. The man in contemporary clerical robes with an ermine collar may represent one of the Pharisees, and he leans toward a bearded figure wearing an Eastern turban. Both men look away from Christ. Especially striking is the copper-colored armor worn by the mustachioed soldier and his horse, whose pose may have been inspired by Albrecht Dürer’s engraving Knight, Death, and the Devil (1513).2 At the bottom, a group of angry men cast lots for Christ’s cloak. Particularly odd is the slashed garment worn by the man standing at far right, which reveals his bare lower-right leg and upper-left thigh. As Ruth Mellinkoff has pointed out, such bizarre costumes are “signs of otherness” that mark their wearers as evil.3
5
Link Copied
Lucas Cranach the Elder is usually considered one of the most Lutheran of artists. Martin Luther and Cranach were close friends. Cranach was a witness at Luther’s wedding in 1525, and Luther was godfather to Cranach’s daughter Anna. Cranach and his assistants produced portraits of the theologian, his wife, and other reformers, as well as depictions of subjects popular during the Protestant Reformation. Cranach spent most of his career in Wittenberg, Luther’s hometown, under the protection of the dukes of Saxony. It is important to keep in mind, however, that Cranach also worked for Catholics; one of his major patrons was Cardinal Albrecht von Brandenburg, a fierce enemy of Luther.
6
Link Copied
The Crucifixion can be easily interpreted as a “Lutheran” picture, illustrating the central tenet of the reformer’s doctrine: salvation is an act of divine grace, obtained through faith alone.4 This is particularly true for the Good Thief and the soldier on Christ’s right, both of whom are saved through faith rather than good works. If the soldier is indeed the converted Centurion, then his words “Truly this man was the Son of God!” and ensuing salvation are achieved through God’s grace. This is in dramatic contrast to the cleric in the ermine-collared robe, at Christ’s left, who calls to mind the abuses of the clergy, such as the accumulation of wealth, against which Luther railed. The notion that the painting embodied Lutheran beliefs led Laurinda Dixon to see depictions of specific individuals, including Pope Julius II, Emperor Charles V, and even Luther himself.5 Martha Wolff was not persuaded by these identifications, and neither am I.6
7
Link Copied
The painting’s layout and design is traditional and in keeping with earlier and contemporary depictions of this subject in Northern European, particularly German, art. The theme was much in demand, and Cranach and his atelier produced a number of Crucifixions in the 1530s that can be related to the Clowes work, such as those at The Art Institute of Chicago, dated 1538 (fig. 1);7 Dessau, Anhaltische Gemäldegalerie, about 1537/1538;8 and Merseburg, Domstift, middle panel of the Heinrichsaltar.9
placeholder
Figure 1: Lucas Cranach the Elder (German, 1472–1553), The Crucifixion, 1538, oil on panel, 47-3/4 × 32-1/2 in. Art Institute of Chicago, Charles H. and Mary F.S. Worcester Collection, 1947.62. 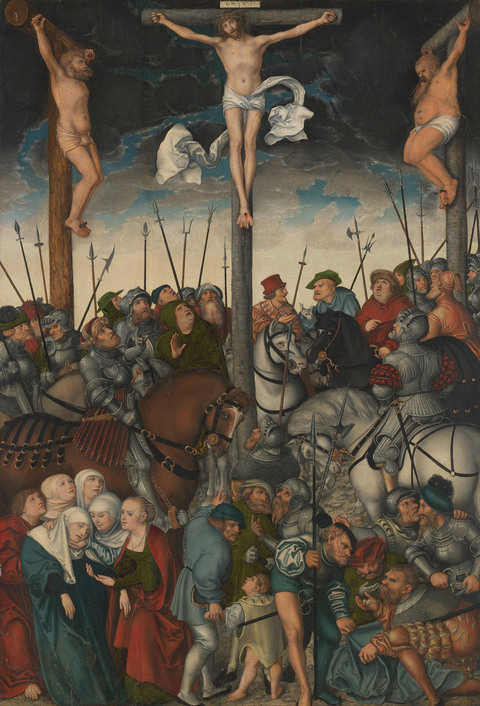 Figure 1: Lucas Cranach the Elder (German, 1472–1553), The Crucifixion, 1538, oil on panel, 47-3/4 × 32-1/2 in. Art Institute of Chicago, Charles H. and Mary F.S. Worcester Collection, 1947.62.
8
Link Copied
Cranach’s early works are often signed with the monogram LC, but in 1508 Duke Friedrich the Wise granted him a coat of arms depicting a serpent with upright bat wings and a ring held in its mouth. The winged serpent probably had humanistic or hieroglyphic significance and could stand for Kronos, the Greek god of time, a pun on the artist’s name in Latin as well as German. Cranach used this device on his paintings from 1508 onward.10 This coat of arms signature is present at the bottom of the Clowes painting.
9
Link Copied
Of particular note is a nearly exact copy of the Clowes Crucifixion that is now in a private collection (fig. 2). Virtually the same size, that painting, on oak, is dated after 1532 and lacks only the Latin inscription at the lower left of the Clowes picture.11 Both paintings, interestingly, include the Dassel family coat of arms at bottom center (fig. 3).
placeholder
Figure 2: Lucas Cranach the Elder (German, 1472–1553), The Crucifixion, after 1532, oil on panel, 2-63/64 × 2-11/64 in. Whereabouts unknown. 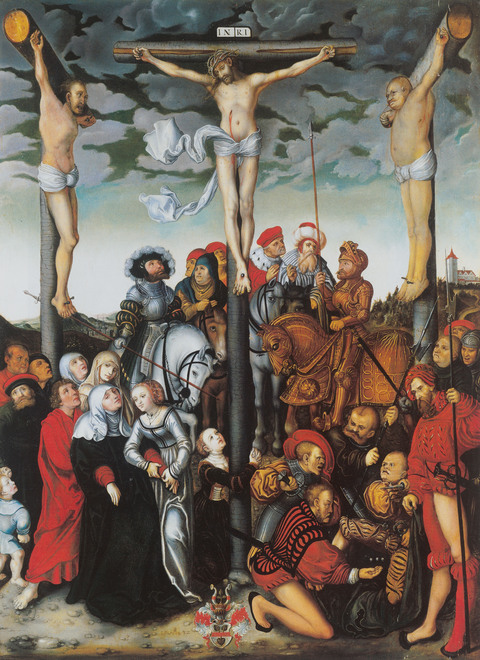 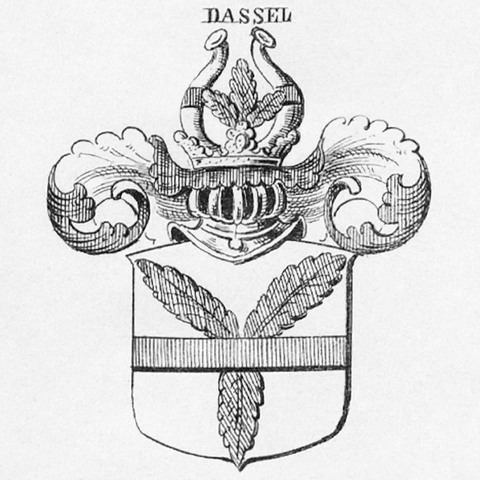 Figure 3: Dassel family coat of arms. Otto Titan von Hefner et al., J. Siebmacher’s grosses und allgemeines Wappenbuch in einer neuen, vollständig geordneten und reich vermehrten Auflage mit heraldischen und historisch-genealogischen Erläuterungen, vol. 3, part 2, Der blühende Adel des Königreichs Preussen (Edelleute A–L) (Nuremberg: Bauer und Raspe, 1878), plate 151.
10
Link Copied
Lucas Cranach the Elder may be viewed as a successful entrepreneur. He was the head of a large and productive workshop, which included his sons Hans, who died in 1537, and Lucas the Younger, and many assistants. All works of art, regardless of quality or degree of participation by the master, however, left the shop under the master’s name.12 More than 400 paintings have been assigned to Cranach and his atelier, and, inevitably, greater or lesser degrees of workshop participation are evident. In the case of the Clowes Crucifixion, however, the high quality and attribution to Cranach the Elder have never been doubted.

Clowes Fund Collection, Indianapolis, and on long-term loan to the Indianapolis Museum of Art since 1971 (C10030);

Given to the Indianapolis Museum of Art in 2000.

John Herron Art Museum, Indianapolis, 1950, Holbein and His Contemporaries, no. 19;

Daniel Catton Rich, Catalogue of the Charles H. and Mary F. S. Worcester Collection of Paintings, Sculpture and Drawings (Chicago: The Art Institute of Chicago, 1938), 39, no. 34;

A. Ian Fraser, A Catalogue of the Clowes Collection (Indianapolis: Indianapolis Museum of Art, 1973), xlvii–xlviii, 176–177;