1
Link Copied
When it was first purchased by Dr. George H.A. Clowes in 1934, this small study was praised as an accomplished work by Rembrandt van Rijn, painted in his later years.1 Figures of old age had long occupied the artist,2 and this bearded man exemplifies his interest in representing the wrinkled skin and gray hair of a life long-lived. The artist applied the paint in the service of this naturalistic representation: the crimson fur-edged hat that sits squarely on the man’s head, the weathered flesh, and the downy beard are painted with varying degrees of thickness, while the brownish fur-lined cloak and jerkin are executed so thinly that the ground is visible beneath the paint. This conscious manipulation of the paint reinforces the picture’s appeal as a captivating image of old age.
2
Link Copied
The broad application of paint and the earthy tonality associate the panel with Rembrandt’s manner of the late 1640s and early 1650s,3 as do three additional works of art historically connected with the artist but long relegated to the status of copies.4 The full-length Old Man in a Red Hat (fig. 1) shows the model seated and wearing similar garb, though his cloak is of a lighter, yellowish color and he holds a long wooden staff.5 Additional slight variations may be found: the jerkin in the Clowes painting features eye-catching buttons, the old man’s lips part slightly, and his gaze is raised higher than in the Berlin painting. A second related painting, extending just below the knees, is in the collection of the Kimbell Art Museum, Fort Worth (fig. 2).6 The connection between the Clowes painting and this one is weaker, however, as the old man in the latter work shows slightly more torsion, resulting in his expression of surprise or apprehension, though his mouth is open and his gaze high, as in the Clowes painting. An engraving (fig. 3) after the Kimbell version indicates that this work was originally full-length, which aligns it more closely with the Berlin painting.7
placeholder
Figure 1: Rembrandt van Rijn (Dutch, 1606–1669), Old Man with a Red Cap, around 1650, oil on canvas, 20-5/8 × 14-9/16 in. Gemäldegalerie, Staatliche Museen zu Berlin, Berlin, 828I. © Photo: Gemäldegalerie der Staatliche Museen zu Berlin - Prussian Cultural Heritage. Photo by Christoph Schmidt. 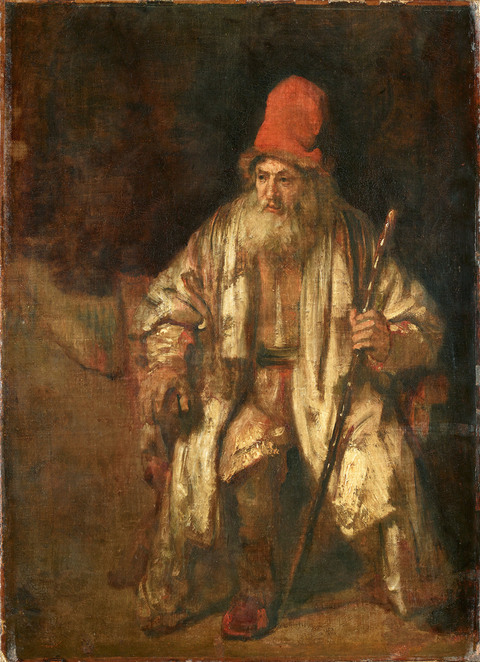 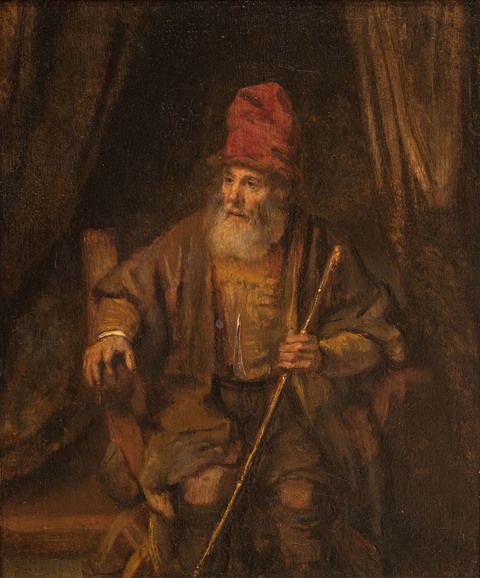 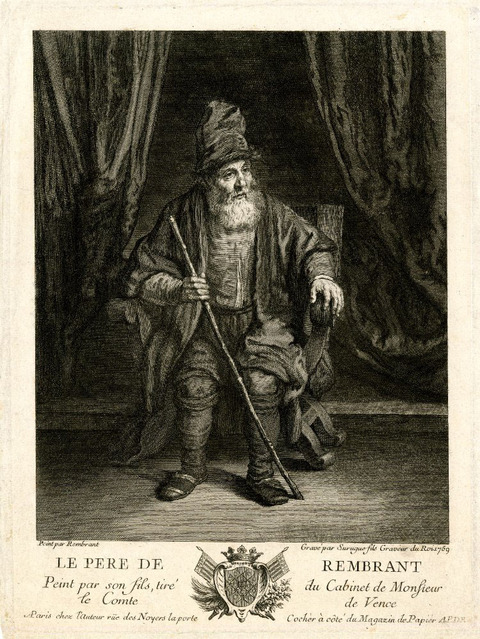 Figure 3: Pierre Louis Surugue (French, 1716–1772), Le Père de Rembrandt, etching and engraving on paper, 1759, 10-25/32 × 7-29/32 in. The British Museum, London, 1861,1109.278. © The Trustees of the British Museum.
3
Link Copied
The relationship between these three paintings has been the subject of much recent research. In volume six of the Corpus of Rembrandt Paintings (2015), Ernst van de Wetering rehabilitates the Berlin painting and gives it to Rembrandt, citing its historic attribution to the master until 1968 and its unrecognized classification as an oil sketch meant to capture the physical activity of movement (here, the activity of rising from a chair).8 He also cites technical evidence, such as the presence of vermilion in the man’s sleeve but not in his red hat and the support’s origins in a larger piece of canvas, to argue that this was an informal study made by the master, comparing it to the Woman Bathing in a Stream (1654, London, National Gallery, NG54). This leads him to conclude that the Clowes and Kimbell panels are “satellite” variations on this prototype, which he dates to around 1654. Claudi Laurenze-Landsberg and Katja Kleinert, having undertaken an extensive investigation of the painting at the Gemäldegalerie in 2014, arrived at a similar conclusion—that the Berlin painting is by the master’s hand—in a report dated to November 2015.9 Laurenze-Landsberg and Kleinert explored the physical condition of the painting and determined that the painting has undergone significant changes: the saffron-colored glazing of the outer robe is not original, the shape and volume of the red hat has been altered, and the background has been overcleaned and repainted. The red hat, the authors contend, would have much more closely resembled the shape of the headgear in the Clowes panel.10 In addition, the painting’s quartz ground supports an origin in Rembrandt’s workshop.11 Building upon Van de Wetering’s hypothesis that this painting is an oil study, the researchers posit that the Clowes panel preceded the Berlin painting as a character study or tronie by an artist in the master’s workshop. They date it to the 1640s.12
4
Link Copied
In spite of these various new data and the close relationships between the three paintings, technical and stylistic evidence indicate that the Clowes panel should remain within the category of Rembrandt’s orbit.13 Dendrochronological analysis by Ian Tyers dates an approximate period of use of the oak panel to between 1626 and 1650,14 which suggests that the painting would have been made in Rembrandt’s own lifetime.15 And while the calcium-carbonate ground and light-brown imprimatur above it are consistent with Rembrandt’s studio, they do not conclusively prove an origin in the master’s workshop.16 The handling of the paint in the Clowes panel demonstrates an awareness of Rembrandt’s efficient handling of ground and upper paint layers, but it lacks the bravura and fullness of the master’s own hand.
5
Link Copied
In spite of these much-debated relationships between these works and the master, clear ties to his studio are evident. In 1940, W. R. Valentiner proposed that the bust-length painting was “probably used for the composition of the supper at Emaus [sic] in the Louvre…the type of one of the disciples of Christ which appears in this famous picture."17 The Clowes panel also bears some similarity to Rembrandt’s fragmentary Homer (fig. 4), dated 1663, through the bearded aged man, his knowing gaze, the slightly parted lips, and the broad handling of paint. The Berlin painting, in which the figure sits upright in his chair as he grasps his walking stick, has been related to a handful of drawings of the 1640s by Rembrandt and his students, including Joseph Telling His Dreams to Jacob, about 1642–1643 (Vienna, Albertina), The Return of the Prodigal Son (London, Victoria and Albert Museum), and, less convincingly, An Old Man Seated in an Armchair, about 1640–1645 (London, British Museum). 18 The print after the Kimbell version even refers to the sitter as “Rembrandt’s father.” Also, the bearded man evokes the focused depictions of older men and women that appear in works dating to Rembrandt’s Leiden period.19
placeholder
Figure 4: Rembrandt van Rijn (Dutch, 1606–1669), Homer, 1663, oil on canvas, 42-1/8 × 32-9/32 in. Mauritshuis, The Hague, 584. 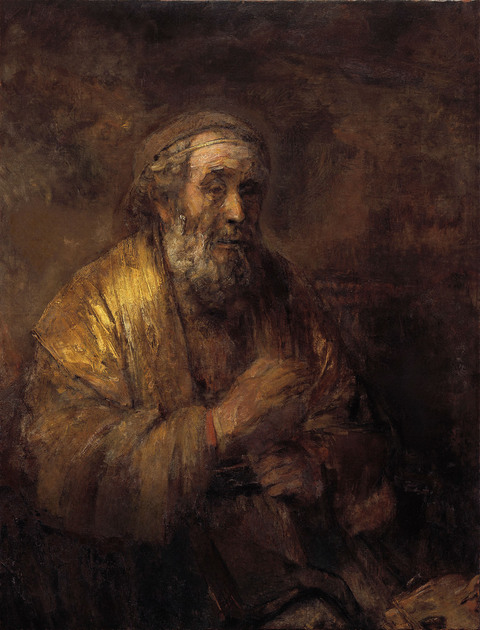 Figure 4: Rembrandt van Rijn (Dutch, 1606–1669), Homer, 1663, oil on canvas, 42-1/8 × 32-9/32 in. Mauritshuis, The Hague, 584.
6
Link Copied
The variety of potential subject matter—from Jacob to the father of the prodigal son, to one of Christ’s disciples to Homer, and even to Rembrandt’s father—raises questions about the identity of the figure in the Clowes painting. The fur-trimmed cloak over the man’s buttoned jerkin and the fur lining of the hat suggest winter attire,20 though the paintings and drawings to which the figure has been related do not specify a winter setting. And while such clothing appears in works by Rembrandt and his students, such as Rembrandt’s 1631 Simeon’s Song of Praise (The Hague, Mauritshuis),21 costume historian Irene Groeneweg maintains that no substantial assessment of intended ethnic group or historical period can be read into the garments.22 Like Willem Drost’s Seated Man with a Red Fur-Trimmed Cap (around 1654, Dresden, Staatliche Kunstsammlungen Gemäldegalerie, inv. 1568) and the paintings in Berlin and Fort Worth, this figure is isolated from a larger narrative context.
7
Link Copied
Whether a “partial copy” inspired by the Berlin painting or, less likely, a character study (tronie) that preceded it,23 the Clowes panel shows an artist trying to emulate Rembrandt’s late “rough” handling. Without further determination of its age, this tronie can only be viewed as a charming interpretation of Rembrandt’s late style by a talented follower working around 1650.

Given to the Indianapolis Museum of Art in 2016.

Ehrich-Newhouse Galleries, New York, 1935, Catalogue of a Loan Exhibition of Paintings in Aid of The Architects’ Emergency Fund, no. 25;

The North Carolina Museum of Art, Raleigh, 1956, Rembrandt and His Pupils, no. 24 (reproduced);

The Art Gallery, University of Notre Dame, 1962, A Lenten Exhibition Loaned by the Clowes Fund, Incorporated of Indianapolis, no. 40.

A Catalogue of the Pictures and Drawings in the National Loan Exhibition in Aid of National Gallery Funds held in the Grafton Galleries, London, exh. cat. (London: William Heinemann, 1909), no. 41 (reproduced);

J.O. Kronig, A Catalogue of the Paintings at Doughty House, Richmond, and Elsewhere in the Collection of Sir Frederick Cook BT (London: William Heinemann, 1914), 2: mentioned under no.

Cornelis Hofstede de Groot, A Catalogue Raisonné of the Works of the Most Eminent Dutch Painters of the Seventeenth Century, Based on the Work of John Smith, trans. Edward G. Hawke, vol. 6 (London: Macmillan and Co., 1916), no. 400;

Catalogue of the Collection of Important Pictures by Old Masters, British Portraits, Engravings and Drawings, the Property of Leopold Hirsch, Esq., sale cat., Christie, Manson, and Woods, London, 11 May 1934, no. 126 (reproduced);

Catalogue of a Loan Exhibition of Paintings in Aid of The Architects’ Emergency Fund, exh. cat. (New York: Ehrich-Newhouse Galleries, 1935), no. 25;

John Howett, A Lenten Exhibition Loaned by the Clowes Fund, Incorporated of Indianapolis, exh. cat. (Notre Dame, IN: The Art Gallery, University of Notre Dame, 1962), no. 40;

A. Ian Fraser, A Catalogue of the Clowes Collection (Indianapolis: Indianapolis Museum of Art, 1973), xxxv–xxxvi, 84–85 (reproduced), as attributed to Rembrandt;